The capture of the Erymanthian Boar was Herakles' fourth Labor. This boar wasn't Babe. It was giant, quick and deadly. Not only did it have dangerous tusks (the death of Adonis shows how deadly these can be), but it was prone to rages. It had been raging and destroying the fields of Psophis in western Arcadia. This region was a favorite haunt of Artemis and tended to be more remote and wild. People were afraid of the boar and wanted it gone. Herkales set out to capture it. And capture, not kill, because Eurystheus wanted to make the task all the more difficult. 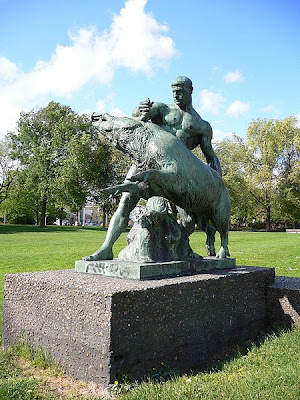 Herkales made his way to Mount Erymanthus in Arcadia, where the boar was known to roam. On the way he decided to visit Pholus. Pholus was a centaur, son of Ixion, and friend of Herakales. He gave shelter, food and company to Herkales. They shared a meal and Herakles noticed some wine and asked Pholus for a drink. Pholus told him he old had one jar and it was a gift from Dionysos to the centaurs of Mt. Erymanthos. Herakles convinced Pholus to open it and the smell of wine drew the centaurs to the area. Some retellings say that the centaurs got drunk off the wine first and others say that were merely angry at the perceived violation of their gift from Dionysos. Either way, the other centaurs attacked Herakles. He launched poisoned arrows at them, but they retreated within Chiron's (his old mentor) cave.

Pholus was curious about the arrows and picked one up, inadvertently poisoning himself when he dropped it and it stabbed him in the hoof. Chiron was also hit, most accounts say by a stray arrow, and was poisoned. Since Chiron was immortal he didn't die, but lived with terrible pain and agony. Later, he'd give up his immortality and became a constellation in the sky.

Though most tellings don't delve into Herakles' thoughts and feelings, one can only imagine how bad he felt. Two friends, kind centaurs were killed due to his foolish and unthinking actions. I can imagine him thinking, if only I didn't open the wine! After this incident he decided to continue on with his task of capturing the boar.

Using the advice Chiron gave him, Herkales chased the boar into the mountain snow to weaken and tire it. Eventually he was able to get an upper-hand on the beast and trapped it with ropes or a net. He then bound the animal and started his journey back to Mycenae. 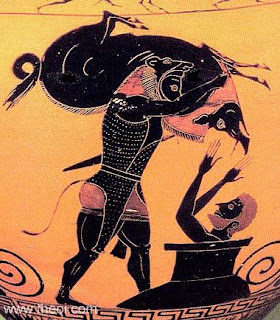 When he got to the palace of Eurystheus, the king was terrified and as he did with the Capture of Kerberos, he hide in or behind a pithos jar. Eurystheus then ordered Herakles to be rid of the beast, which Herakles did. Some accounts say he threw it into the ocean.

This Labor, out of the ones I've covered so far seems different. Perhaps it's the diversion with the centaurs? Herakles decided to take a breather for a bit, but it failed miserably. He pissed off the centaurs, which lead to the deaths of his two friends. Seems like Herakles can't catch a break. After this, he's wading in shit (literally) in the Augean  Stables, but more on that soon!

Pantheon.org
Wikipedia
Theoi
The Erymanthean Boar
Posted by Asterope at 3:46 AM No comments:

For he alone is brave who bends the branch...

I came across a poem and thought I'd share. I don't know if this is the full poem or not, as site I am using to view it is only allowing preview of this one page and oddly, I can't find the poem anywhere else online. Here's what I could see of it:

A tense and whittled thundershaft he pulls
Within his supple crescent,
To send the bolt among the gulls
Or drop the pheasant.

The padding fox has heard the leather sing
Against his restless hand,
The swallow bends a slow and cautious wing
Above the hunter's land.

For he alone is brave who bends the branch
And draws the fatal dart
To send a fire no blood can ever quench
Into the innocent heart.

Email ThisBlogThis!Share to TwitterShare to FacebookShare to Pinterest
Labels: poetry

I still have two weeks until I can jump back into the PaganBlogProject, but in the meantime I wanted to post something. I plan on writing more about Herakles and Omphale later either for an O or S (for slavery/servitude).

Posted by Asterope at 8:51 PM No comments:

Hail, Hercules, true son of Jove, an added Glory for the Gods are you.
Come now, and dance at your holy rites with skillful feet.
Posted by Asterope at 7:12 AM No comments: 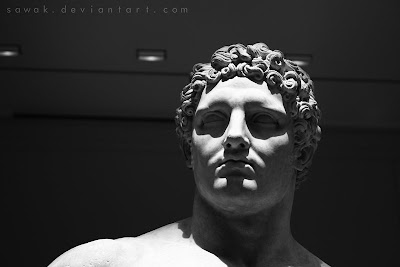 Herakles by ~sawak on DeviantArt.com
Source
Posted by Asterope at 5:35 AM No comments:

Not only is there a moth named after Herakles, but a beetle. It's a type of Rhinoceros Beetle, native to Central and South America. These types of beetles are among the largest in the world.


Here's a video of two males dueling during mating season:
And here's one just chilling on a rock:

Random facts I've found about them:

And according to Wiktionary, Dynastes means, "a ruler, prince." 2

As I said a few days ago, I wanted to write at least one hymn/prayer before the 4th day of the (Greek calendar) month. I kept trying to write the most awesome, perfect hymn/prayer, but that's what kept tripping me up. I laxed my expectations and just let things flow. Here's the result ---


Hail Herakles!
Guardian, Protector--
Glorious son of Loud-Thundering Zeus
I honor you--
Who completed the Labors,
Never retreating from a task
With determination and courage
You triumphed!
Herakles, mighty warrior
Hero-God of all of Greece,
Defender and Deliverer
Hear my prayer!

image by futon-revolutionist on DeviantArt